It has been a long, long time coming; but it finally appears that a GSP return to the UFC may be just around the corner. Way back on December 13th, 2013, Georges St Pierre made the call to take an indefinite sabbatical from the UFC and in doing so, vacate his Light Welterweight Title, a title that he’d held since 2007. At this point, GSP was in the absolute prime of his life, racking up title defences and fight bonuses (his 2012 bout with Carlos Condit is an all-time classic), but was struggling to cope with the demands of being the top dog. The Montreal native has spoken candidly about his battles with OCD, and the pressure that followed at all times, stating that “there was too much pressure, too much criticism”.

Since then he’s dealt with a torn ACL in 2014 which required surgery, and whilst he has been seen training with numerous main event talents - we’ve had little more than hearsay and the rumour mill to rely on with regards to his future and a possible return to the Octagon. However, a recent interview with the man himself, held back in July, shed some light on the current situation:

“My agent is negotiating with the UFC, they had an offer, we made a counteroffer, you know that's how business goes.”

So what will await GSP if he does return to the UFC? For starters, he will have to complete the USADA mandated 4-months of drug testing to be eligible to fight - St Pierre began USADA testing on August 10th, so he will not be able to fight until December - a month in which the UFC returns to Toronto, Canada for UFC 206.

It’s likely that this incredibly convenient timing is no coincidence, and that negotiations are already well underway for an absolutely monstrous payday for GSP - who is, unsurprisingly, box-office gold dust for the UFC when it comes to Canadian PPV money. Michael Bisping (who is gearing up to defend his Middleweight Title at UFC 204 in Manchester in a rematch against Dan Henderson) has already called him to make a date for December, however what little noise we’ve had from the GSP camp seems to indicate possible comeback fights against either Tyron Woodley or Nick Diaz.

If you’re a GSP fan and want to show your colours as the man himself gears up for a comeback fight, we’ve got one of the coolest-looking GSP Affliction shirts available to purchase online - the Affliction George St Pierre Legend tee: 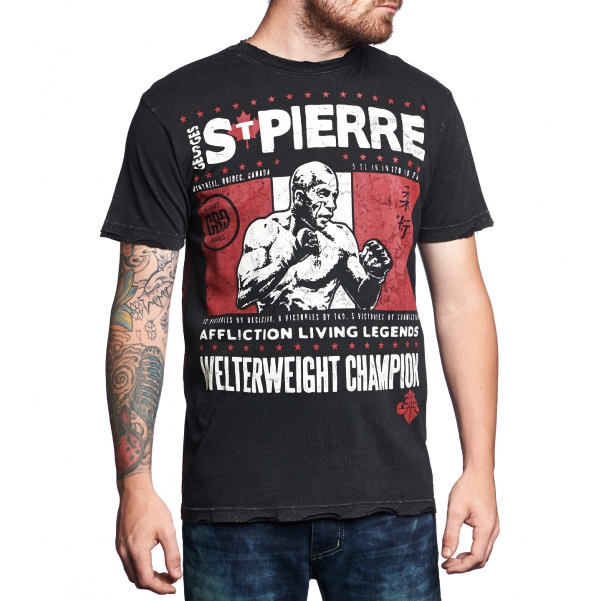 Made4Fighters are Europe’s leading online MMA store, and we’ve got one of the largest ranges of official UFC apparel and clothing, and a whole host of premium MMA t-shirts.

Now that a Georges St Pierre return is looking like it’s only a matter of time, who do you want to see him make his long-awaited return against? Let us know by leaving a comment below or by sharing your thoughts with us on social media.