Your little one watched “The Karate Kid” for the first time and now they’re running around the house practicing flying kicks, creating their own karate costumes, and begging you to sign them up for lessons. Karate is a popular sport for kids these days. Many dojos offer more karate classes for kids than they do for adults! Karate is an all-inclusive martial art, with co-ed karate for girls and boys alike.Before you agree to take your child to the nearest dojo, read through the following tips to learn:

Is Karate Right For Your Kid?

Before signing up for kids’ karate classes, there’s a lot to consider. Karate in the real world doesn’t exactly look like Mr. Miyagi teaching youngsters how to “Wax on. Wax off.

Karate is an unarmed form of martial arts where individuals use their bodies to kick and strike their opponents along with defensive blocking using the arms and legs.

Before you dive in too deep, you’ll want to make sure your child is old enough to take part in karate classes. What age should you start karate? As a general rule of thumb, most dojos will accommodate kids as young as 4-6 years old. Karate for toddlers might be a little harder to find, but you can always call your local dojos to find out.

You’ll also want to talk to your child about what karate classes will be like. Modern karate classes might be different than kid’s karate movies they’ve seen. It’s not all about doing cool moves and breaking blocks of pine with your bare hands! You might find it helpful to show your child some karate videos to show them what karate classes actually look like. Here’s a video from Arashi Do Martial Arts that shows a typical children's karate class.

There’s more for kids than karate!

Executing cool moves, better physical ability, and greater mental concentration aren’t specific to karate! Before deciding on karate, explore other martial arts that are good for kids. Aikido, judo, and tae kwon do are other popular kid-friendly martial arts that can help your child grow physically and mentally.

Aikido is a martial art that focuses on self-defense and directing force back to the attacker in a non-harmful way. Aikido is non-competitive and helps children gain respect for themselves and each other. It can put a fair amount of pressure on joints, so it’s sometimes not recommended for young children. However, different dojos have different requirements so it’s always best to check with the dojo.Taekwondo is a Korean martial art that focuses on different types of fast kicking techniques. Blocks, joint locks, punches, throws, and take-downs are still learned, but with less focus than kicks. Taekwondo for kids can involve kicks to the head, so it’s up to you to decide if you feel the protective gear will do enough to keep your child safe.

Judo is a grappling form of martial arts. Unlike karate, aikido, and taekwondo, judo does not involve strikes, kicks, or punches. Judo focuses on flexibility. It can cause some upper-extremity injuries. Judo might interest your child if they like wrestling and rolling around on the ground more than kicking and punching.

Depending on their age, all the different types of martial arts might overwhelm your kiddo. It may be helpful for you to show your child other types of martial arts instead of trying to explain their options. Here’s a video of a kid’s taekwondo class. They might be surprised it looks just as fun as karate!

Is Karate Safe for Kids?

While all types of martial arts share similar benefits, karate is well-known for its belt progression. Many kids who start out with the humble white belt dream of moving up the ranks and eventually earning their first black belt.

Karate can help with goal setting, determination, patience and dedication, which is why it’s often considered among the best martial arts for kids. If your child wants to learn how to do karate properly, then they’ll have to work hard, show up to the dojo for classes, and even practice at home. They’ll also have to listen well in the dojo and follow the rules of their sensei. Karate classes are also good for increasing cardiovascular health and social skills. Like other martial arts, karate has its own share of risks. Injuries to the hands and feet can happen, but proper protective gear can potentially help mitigate this risk. 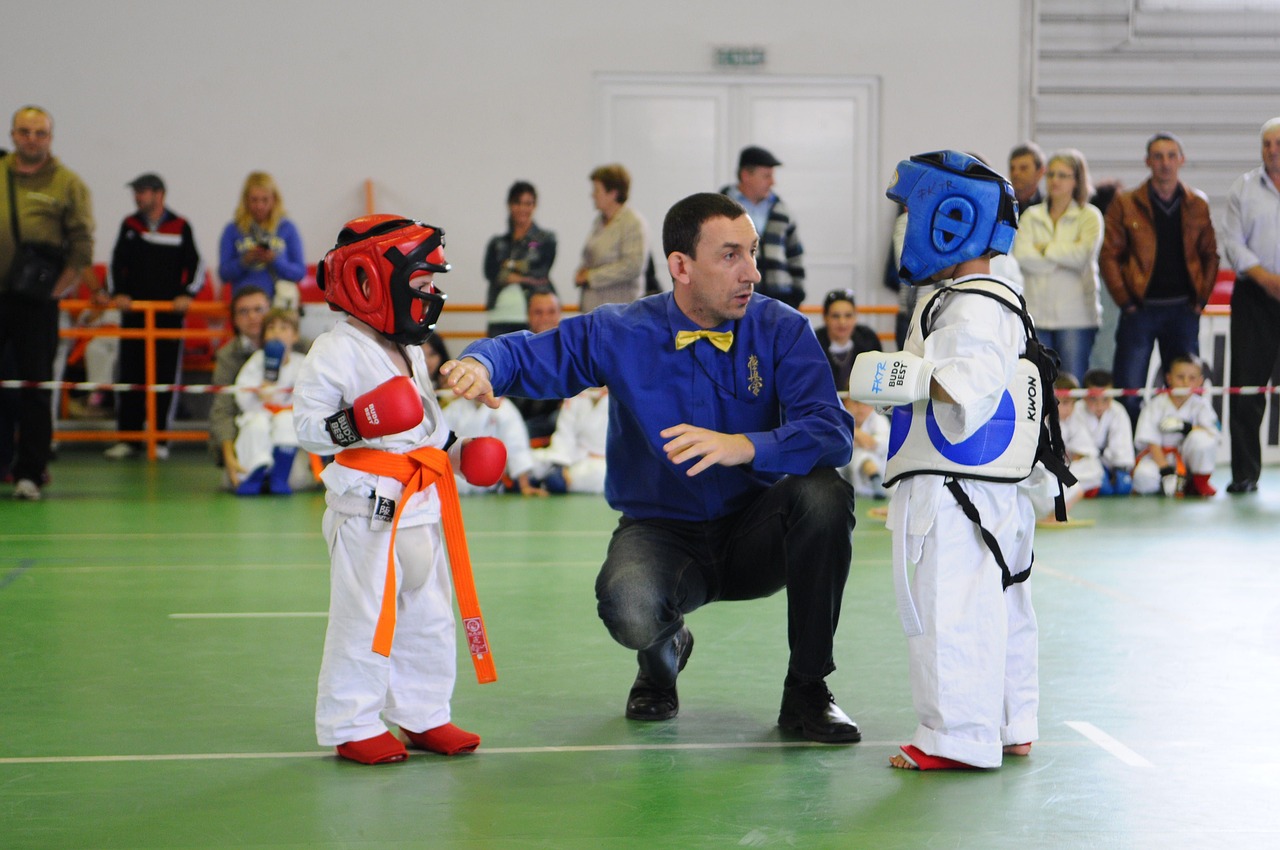 Picking a Dojo & Finding Karate Classes Near You

Now that you’ve decided enrolling your kid in karate is a good choice, now comes the fun part: picking a dojo and signing up for the first class. A good place to start is, of course, Google! If you have friends who have kids in martial arts, you can also ask them for their recommendations. On Google, a simple search such as “karate classes for kids near me” will give you some great options. Once you find a few dojos near you, you’ll want to analyze the following details:

How much are karate lessons for kids? The honest answer is it depends! Classes may be more in an expensive city or if you choose a renowned dojo.When you’re price shopping for karate classes, you want to make sure you’re comparing apples to apples. One dojo might have a 3-month special that looks cheaper on the surface but only includes half as many classes as a more expensive package at another dojo. Comparing average rates per class will help you get the most bang for your buck. Keep in mind that rates can differ based on the quality of the teachers, the reputation of the dojo, class length (e.g. 60 minutes vs. 90 minutes), amount of children per class, and different curriculum.

You might want to make a wish list of features that both you and your kid are looking for in a dojo and karate classes, then start comparing prices from there.

Some dojos that feature karate classes on their website may incorporate other styles of martial arts into their curriculum. Other dojos with only teach the “pure” form of karate. Whether you want a dojo that teaches only the pure form of a single martial art or blends multiple martial arts together is up to you.

However, you might want to consider reading about the dojo’s mission and even paying them a visit before committing. To excel, kids often need to feel happy and secure within a space and the right dojo-fit can potentially bring a more positive change than the nitty-gritty details of the curriculum.

Does your child have a competitive streak? If so, you might want to consider looking for a dojo that trains kids for competitive karate events, which are referred to as Kumite (karate techniques against an opponent) and Kata (choreographed movements). Competitive Kumite events award points for proper punches and kicks against an opponent in a controlled, judged setting.

If hand-to-hand combat doesn’t interest your child, there are also competitive events for Kata. Kata is a solo event where children are judged on the power and execution of a predetermined set of moves.

Preparing For Your First Karate Class

Unlike hockey or football, there isn’t a long list of equipment that kids need to start karate. The only required gear is a kid’s karate gi. A karate gi (pronounced “gee” like in “geese”) is simply a karate uniform. It’s a plain white or black outfit that kids wear while practicing and participating in competitions. A proper karate gi should be lightweight, tear-resistant, and definitely machine-washable! A high-quality kid’s karate gi will last a long time if properly cared for.

Your youngster will probably be eager to practice their new moves at home! Practicing at home helps kids solidify the moves they learn during class and helps get the whole family involved in the learning process. While you won’t need to buy any special at-home karate gear to start karate classes, you might want to invest in some if your kid starts to get serious about karate. Training bags can be helpful if they want to practice landing their punches and kicks.

Other Things to Note About Karate for Kids

Once you decide on a dojo and your kid straps into their newly beloved karate gi, it’s time to let the fun begin! Make sure to arrive on time to the dojo and check out the dojo news board. If there is a viewing room, your child might appreciate it if you stay and watch them learn. Plus, dojos often have family classes.

Let us know if you need help starting karate for your kid or picking out the right equipment!